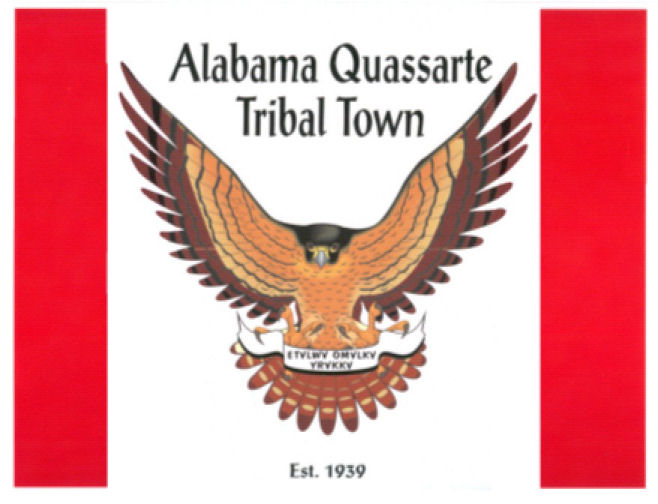 Prior to the removal of the Muscogee Confederacy from their Southeastern homelands in the 1820’s and 30’s, the Alabama and Quassarte people each had a distinct identity as a TribalTown (or Tribe) of the Confederacy.  The Confederacy consisted of more than 44  of these “Towns” scattered throughout the Southeastern woodlands.  Due to the logistics (or locations) of their towns which were in near proximity to one another in what is now known as the State of Alabama, they shared many similar cultural characteristics such as certain aspects of their language, religious practices and social/familial structures.

With the advancement of European settlers into the region, many members of these two groups, in an attempt to avoid contact with the “invaders”, migrated Southwest into Louisiana and Texas in the 1790’s and early 1800’s where they remain today (Coushatta Tribe of Louisiana & Alabama-Coushatta Tribe of Texas).  Those members who did not leave formed an alliance and became the Alabama-Quassarte Tribal Town.  Pre-removal tribal government was traditional and its leaders were the ceremonial leaders.

This body participated in the old Muscogee Nation Confederacy government and were subsequently included in the Removal Act of 1830.  The group settled into Indian Territory (I.T.) in what is now Hughes, Okfuskee, McIntosh and a portion of Seminole Counties of Oklahoma.  Following the Dawes Act of 1888 and the consequent individual Allotment Act, the old Muscogee Confederacy and Creek Nation constitutional government was disbanded.  Elections were no longer held and the President of the United States appointed a Chief for the Creeks every four years.  The ceremonial government, however, continued through the Alabama Ceremonial Grounds near Wetumka, OK..

Congress passed the 1936 Oklahoma Indian Welfare Act which contained provisions for Indian Tribes to reestablish their legal identities through federal recognition by the Secretary of the Department of Interior.  In addition lands were allocated to be placed in trust for those Tribes.  Visionary members of the Tribal Town saw the opportunity, organized themselves and adopted a constitutional form of government.  The Department of Interior approved the Constitution in April of 1939 and the Tribal Town was given federal recognition in the form of government that stands today.  As a component of the original Creek Confederacy, AQTT’s members enjoy dual citizenship as Muscogee (Creek) Tribal members as well.

Due partially to the International conflicts and World War II as well as complacency by tribal members, there was a lull in the activity of the Tribal Town during the 1950’s, 60’s and into the 70’s.  Because of new opportunities under the Indian Self Determination Act, the Tribal Town renewed its efforts to be a viable and self sufficient government for its members.

Today the government stands as a beacon with a clear direction of forward progress into the 21st century.  The Tribal Town has a certified enrollment of 350 members.  The government operates several federally contracted and grant programs and has acquired more lands and facilities than ever before.  The Tribe owns enterprises and generates substantial revenues for itself.  Economic Development in several forms are being pursued which will assure the long term growth needed for its members and future generations.